Mr. H.M has chosen to raise funds for Nordoff Robbins, Teenage Cancer Trust, ChildLine & Save the Children and is taking part in HMT 2020: The Eighth of Spades - Virtual Ride 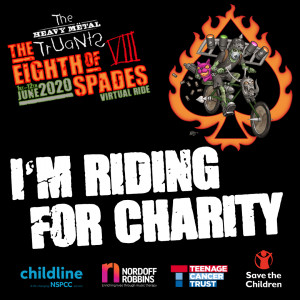 Between June 1st and in the run-up to June 12th, the weekend of Virtual Download Festival, we want you to get in the saddle and join us on a virtual ride. Anything with pedals which you can log on Strava is fine - actual bikes, smart trainers, or simple exercise bikes: if you can log the miles on Strava, you can join the ride. If you are going outside on a real bike though we ask that you do so safely and according to government guidelines!

This isn’t about the distance - it’s about the fundraising, and anyone who completes the minimum distance is automatically entered into the roll-call of legends known as the Heavy Metal Truants, but there are always a few maniacs who want to take it a little further, so with that in mind...

THE THREE CYCLES OF HELL
The Road Crew
175 miles - or the precise distance between Hammersmith and Donington, taking in the metal sites of East London before venturing out into the British hinterland, and the average mileage for the first seven HMT rides.

The Bomber
333 miles - Because anyone who knows anything about Lemmy knows that he loved a double.

Overkill:
666 miles - because every party, gig, and indeed bike ride always has to have that guy or girl who takes it that much further...

Not sure who to donate to?
You can still donate to Nordoff Robbins, Teenage Cancer Trust, ChildLine & Save the Children and help with this event's fundraising efforts by supporting a great cause.

"As a Truant, very proud of Alex, Helen and all the HM Truants! Well done one and all in doing this and this time! Bravo!"

"In support of Colin’s virtual bike ride to Download"

"Amazing work, loved hearing about the challenge on Download TV and the fantastic charities you support.I work with a lot of these children so I know how much support like this means to them - keep it up guys & gals !"

"Saw you on DOWNLOAD TV. Thanks for doing all you did for these kids. You're an inspiration. "

"Primarily for Helen but for everyone doing this: amazing job!"

"Such a worthy cause keep up the good work your amazing "

"Great work from the metal heads! "

"For my Uncle Mark, well done!"

"Matt, best of luck for these great causes , don't forget the face mask !!"

"Good luck Illy! Brilliant cause and will be cheering you along (virtually! ) Good luck to all the truants too \m/ Kevin"

"For my buddy Phil Birch."

"Heard you on the Fetcheveryone.com podcast. Rock on!"

"Hi there - heard your recording on Fetcheveryone.com podcast. Brilliant endeavour raising money for fantastic causes. Wishing you all the best! Cheers, :-) Gavin"

"I'm signed up and riding the HMT8 challenge, but can't sort out the donation part. So I will be donating via this link."

"Well done all. Amazing what you are doing for these charities. Good luck. Padge"

"In honor of Luke Burdess" 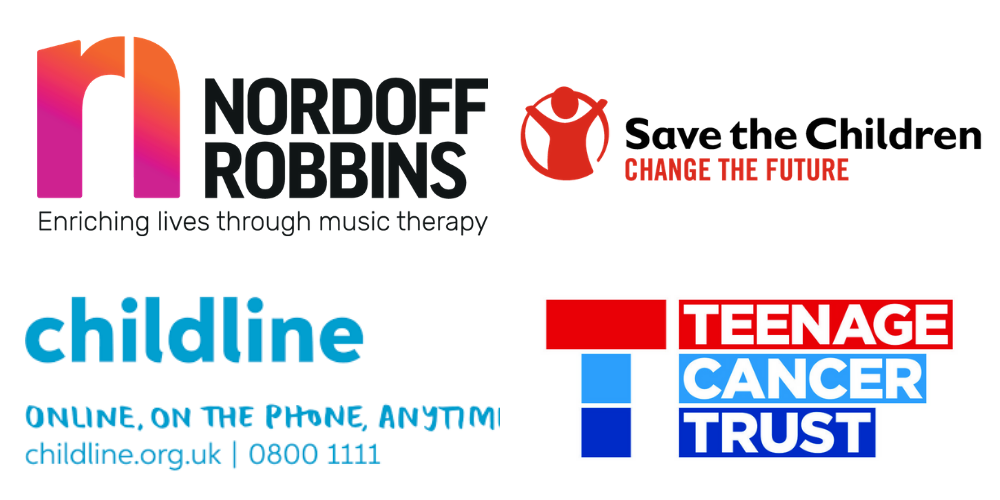 Nordoff Robbins is the largest independent music therapy charity in the UK, dedicated to changing the lives of vulnerable and isolated people in its own centres or partner organisations such as schools, care homes and hospitals. Nordoff Robbins music therapy can be used to support people living with a wide range of needs, including children or adults with learning difficulties, those living with dementia or mental health issues, or provide comfort and celebrate the life of someone facing terminal illness.

Teenage Cancer Trust is a cancer care and support charity in the UK that exists to improve the cancer experience of young people aged 13–24. Founded in 1990, the charity's key service is providing specialist teenage units in NHS hospitals.

ChildLine is a free 24-hour counselling service for children and young people up to their 19th birthday in the UK provided by the NSPCC. ChildLine deals with any issue which causes distress or concern, common issues dealt with include child abuse, bullying, mental illness, parental separation or divorce, pregnancy and substance misuse.

Save the Children ensures that children in the UK and around the world are safe and healthy. They support them to learn, grow and become who they want to be.